Kochi: In a mood that was filled with joy, music and a bit of Sufi wisdom, curtains came down on the second edition of the Kochi-Muziris Biennale on Sunday night.

Though the Biennale flag was lowered in the evening at Aspinwall House, Fort Kochi, the real culmination of the 108-day art extravaganza happened with a Malayalam Sufi music concert by singer-composer Shahbaz Aman's band.

Apart from the concert, a freewheeling dance and a tea ceremony heightened the creative spirit of the festival on Sunday.

Bilas Nair’s solo show, named Vis Insita, was held since the forenoon at the Aspinwall House, while the tea ceremony was hosted at Cabral Yard close by the main venue.

Bilas, dressed in black, got himself involved in an interactive performance, showing the potential of the use of the human body even as he attended official phone calls as a production coordinator of the KMB’14 team. 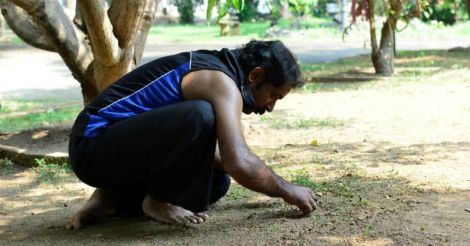 “I last performed in December 2012, just before the first Biennale began,” recalled the 39-year-old Malayali, who is trained in mime under Narayan Goswami of Kolkata, and was here accompanied on-and-off by friends on the guitar and drum. A native of Varkala near Thiruvananthapuram, the Mumbai-raised artist has been living in Kerala since 2000 and working with Abhinaya, a theatre group based in Thiruvananthapuram.

He said that he decided to perform on the Biennale venue in a bid to overcome the fearful stagnation he came across after suffering a leg-injury which forced him to take a break from theatre.

“All of a sudden, I started having nightmares, in which I was abused by my friends for not doing anything. With a shock, I realised that I had come across a stagnation point and decided to overcome it through this performance. Luckily, I could realise the stagnation which doesn't happen in many others' case,” Bilas said.

The artist used the pebbles around the venue to symbolise the stagnation throughout his all-improvised performance. Shanto Antony, Edwin, Vipin and others helped him with music.

Giving a local spin to the ceremony, Mai prepared and served pure powdered green tea in earthenware. “I feel in love with Valsan’s space and I am thrilled to perform here,” said the artist, who carries some of the traditional Japanese tea-making equipment with her on her travels.

“We could explore not just the operational and intellectual dimensions of art, but could directly engage people through a wide range of cultural activities,” said KBF founder president Bose Krishnamachari about KMB’14 curated by Mumbai-based artist Jitish Kallat.

Kallat, who was KMB’14 artistic director, said he was keen that the visitors at the biennale should journey through works as varied as drawings, paintings, sculptures, installation, minimalist poem, video and performance. “Even cartography was instrumental in one’s grasping of the world,” he added.

Talking on the sidelines of the function, KBF trustee and managing director of CGH Earth, Jose Dominic said that all criticisms and protests that the first edition of the KMB died down with the second edition. The critics have become either supporters or taken a neutral stance, he said.

“Biennale is the best news that is going global from Kerala. Of late, most of the reports came in international media from the country had been about rapes and other crimes. I remember a German daily publishing a report ridiculing the liquor ban and strict morality in the state. Now, with the second edition of the Biennale, the scene has changed and it would help the tourism sector,” Dominic said.

Another trustee, Subhas Chandran, said that despite the financial crunch, the trust has started working on the next edition of the Biennale.

The exhibition witnessed an inflow of around 2,500 visitors on the final day. Among them were notable social activist Teesta Setalvad and art promoter Shireen Gandhi.

“I had an amazing time,” said Mumbai-based Setalvad, who came down for a day to see the exhibition. “There are many meaningful works about where we are going in the world in terms of economics, ecology and politics. As someone involved in education, I wish more students took the opportunity to come to the exhibition.”