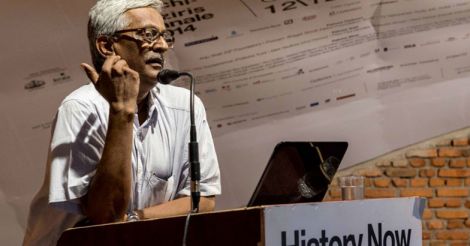 “Many here are getting nosey. More so the cops. They will come and ask whether I have got permission to sketch. Permission from who? Do we have such a system in India? Does drawing require a licence like you need for driving?” he questioned while presenting a talk on Wednesday at the Kochi-Muziris Biennale (KMB).

Delhi-based Unny, who authored a travel book on Kerala in 2001, recalled that the place used to be doodle-friendly—a character it has been losing going by the experiences behind his more recent work, Santa and Scribes: The Making of Fort Kochi, brought out last year.

“Earlier, such restrictions were confined to VVIP events. Today, they’d ask: ‘Why do you laboriously sketch when you can easily click a cell-phone picture of the sight?’ As if we are planning to blow up the place,” shrugged the middle-aged cartoonist, who is a native of Elapully near Palakkad. “At this rate, sketching publicly will become impossible in Kerala in five years.”

Unny, who is chief political cartoonist, said this trend contrasted with the general treatment to sketchers upcountry. “In the North, even tea vendors warm up. ‘Chitrakar hein yaar (Artist he is)’, they would say, and decline payment for the snacks,” he said during the last episode of the ‘History Now’ programme organised as part of the second Biennale which will end by March 29.

Unny, in his hour-long talk titled ‘Beyond the Cubicle: A Cartoonist Sketches’, briefed about cartoonists commenting about the world outside while remaining desk-bound smacked of “absurdity” and “conceit”.

“Luckily, the country’s politics began becoming less Delhi-centric by the late 1980s owing to the rise of regional parties. This prompted many newspaper editors to send their cartoonists on trips to cover political events,” noted Unny, whose first work was published in Shankar’s Weekly in 1973.

As for India’s politicians, the “tough” ones with mass rustic base are largely easy with cartoonists, the speaker observed. “It’s the urban-bred netas who are perpetually image-conscious, and interact with reservations,” he added at the lecture that was laced with some 150 sketches he has done over the past quarter century during travels across India.

Unny, a keen music enthusiast, showed for a while an open-air concert sketch, recounting a May 2000 rendition by classical Hindustani vocalist Bhimsen Joshi at a Delhi park. “It rained unexpectedly, but the partly-drenched Panditji sang for full three hours with an umbrella extended above him. The showers gifted my sketch with watermarks.”

Down south, a Chennai sabha has young Sanjay Subrahmanyan singing on the faraway dais while a clean-shaven aesthete in the back row reading a magazine and yet listening to the Carnatic recital.

Unny’s Kerala sketches that teemed with the state’s historical monuments and public figures had, among others, maestro Kalamandalam Gopi in the greenroom decking up in phases for a Kathakali show. “While it is so fascinating to sketch the meditative backstage activity, drawing the vibrant live performance is challenging.”

The visuals threw light at the “parallel faces” of the 1990s Andhra Pradesh, which, under Chief Minister N Chandrababu Naidu, had the state capital getting a high-tech makeover even as the countryside remained static.

The Buddhist-hangover Nalanda-Rajgir area, barren Ladakh’s dances, Mumbai’s Raj-era buildings and the bullocks from “Anywhere in India” formed the themes of other sketches.