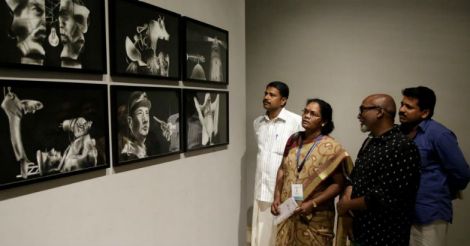 Kochi: As a social activist fighting for tribal uptlift, C K Janu finds Kochi-Muziris Biennale as a philosophical exploration of the codes of nature.

“I feel the artists here are into a deeper search of the dynamics of elements such as earth, water and soil. I could relish the philosophy, I could sense its historical relevance,” she said after a visit of the main Aspinwall House venue of the 108-day festival set to conclude this Sunday.

Janu, 44, said KMB’14 “is a must-visit place for all”, given the message-lending capacity of the artworks. “Most works here are very futuristic and beyond time, where the artists have shown limitless possibilities of imagination,” the influential Adivasi leader from Wayanad noted on Monday evening.

“Like diagnosing a mind, the biennale works prompt one to think freely. That in itself is great contribution to a society in our times of constrained ideologies and thoughts,” she added, expressing gratitude towards the Kochi Biennale Foundation members.

Japanese artist Ryota Kuwakubo, who is back at KMB’14 venue where his shadow-play work is making waves in the art circuit across the world, said he found Kolkata-born Susanta Mandal’s installation on soap-bubbles “particularly fascinating”.

“That work has the backing of technology at a measure that is similar to mine,” the 44-year-old visual artist said about “Where have all the stories gone” in which Delhi-based Mandal has created kinetic sculptures that explores the ways in which light, shadows and air interact with the static structures they inhabit.

Tokyo-based Ryota, whose work ‘LOST # 12’ is a also a kinetic sculpture but one recreating a phantom landscape out of the play of light and shadow, recalled that his earliest trysts with the concept happened as a child.

“We used to play Kage Humi as kids,” he wound back, pointing out that it was a leisure-time activity where kids would be chasing the competitors’ shadows to step on them.

“Later, I thought I should explore more about the possibilities of moving shadows in moving light,” added Ryota, whose Aspinwall work has become a major hit with the visitors across ages, gender and region.