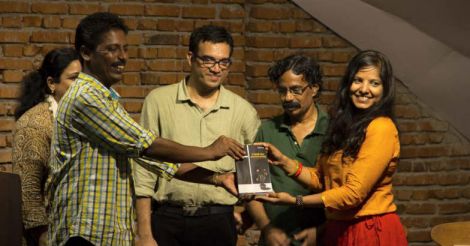 Poet Leena Manimekalai (R) releases 'A strange place other than earlobes' by handing over the first copy to poet Kuzhur Wilson on Thursday at Aspinwall House, Fort Kochi.

Kochi: In an evening that was set in a mood of poetry and friendship, Kochi-Muziris Biennale became venue for the release of an anthology of poems by five authors.

The function was held as part of KMB' 14's 'History Now' session. KMB'14 director of programmes, Riyas Komu, introduced the book. Sreelatha Chakravarthy, Ravi Shankar (Ra Sh) and Binu Karunakaran, three of the five poets who were present at the function, recited poems from the book. Jeena Mary Chacko and Bini B.S. are the other two poets.

The writers who reside at various parts of the country were brought together by social media.