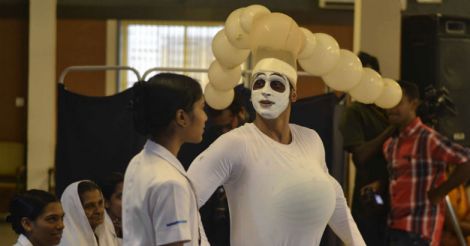 Kochi: For over 50 weeks now, music has been playing the role of a healer for the patients at General Hospital here on Wednesdays. This time, music played a secondary role giving way for acting that brought smiles on the faces of the audience at the weekly Arts and Medicine show of the Kochi-Muziris Biennale (KMB).

With his on stage conduct as a clown, the character named Doctor Vikadan transmitted vibes of cheer across the patients and others who had gathered at Ernakulam Government General Hospital, interacting with them jovially through his actions that had an appeal of eccentricity.

Predominantly decked up in white, which was the colour of the paint on his face as well, young theatre professional Vinu Joseph had balloons on both sides of his head and stuffed into his clothes, much to the amusement of the audience at the hour-long show organized by the Kochi Biennale Foundation as part of the 108-day KMB’14, which is concluding next week.

The comicality of mannerisms got accentuated with background music from veteran O C Martin, whose vitalizing scores kept up the tempo of the drama of sorts. Vinu, who graduated from the School of Drama in Thrissur, noted that this kind of a contemporary clown act has not been popular in Kerala. “Here it is in the form of a play; thus audience interaction is very important,” added the artiste, who is currently doing a research fellowship on ‘Devices in Theatre’ from London.

‘Doctor Vikadan’ constantly engaged with the audience and made them involved in his act as well. “Hospitals are usually considered gloomy spaces of suffering, but today I see smiles all around,” Vinu gushed. “I hope my performance was an enjoyable experience for many people, at least momentarily.”

Musician Martin said background score was critical in clown acts. “We have to change the music according to the character’s mood,” says Martin who started his artistic life as a painter.

As the 40-year-old musician sang lyricist-scholar Kavalam Narayana Panicker’s famous Malayalam folk song ‘Vaikom Kayalil’, the play churned out its most upbeat moments for the audience.

KMB research coordinator and cartoonist Bonny Thomas said the clown act was just the beginning of incorporating more art forms in the Arts and Medicine programme, which is held in association with the Mehboob Memorial Orchestra, Lakeshore Hospital and Research Centre and the district administration.

“We are planning to bring more variety to this Wednesday serial. By that, we intend to change the notion that hospitals are a place of misery and provide a healing experience,” he added.