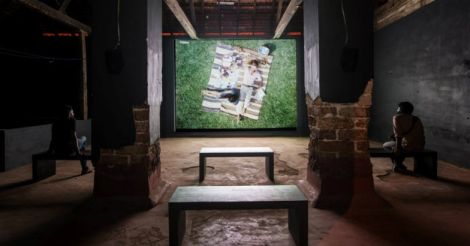 Kochi-Muziris Biennale has attracted about 5 lakh visitors over 108 days, carving a niche for itself in the global art circuit. Jitish Kallatt, Bose Krishnamachari and Riyas Komu deserve our applause for organising an event which brought international fame to Kochi. Curators of international biennales and directors of museums visited the Kochi event and invited the artists to their ventures.

Kochi-Muziris Biennale strikes an immediate resemblance to the Venice Biennale, the oldest and one of the grandest. Both are hosted in port towns. The Kochi backwaters call to mind the canals of Venice. Both cities have a history of Jewish migration. Both biennales draw more foreign visitors than natives. The Venice Biennale, along with the Kassel Documenta in Germany, is one of the leading art exhibitions in the world.

It is time to envisage Kochi-Muziris Biennale as a year-long exhibition except for the monsoon, allowing organisers to add events focusing on architecture, design, theatre, music, performing arts and book exhibitions apart from the visual arts biennale.

This will benefit the common man in Kochi as well as the artists, by generating employment opportunities. Hotels and restaurants can be assured of year-long business. So will be the transport operators. Textiles and handicrafts industries will also get a boost from a stretched biennale.

This requires a permanent venue, clear administrative mechanism and financial support while retaining the autonomous nature of the event. Existing venues such as Aspinwall House, Pepper House and Durbar Hall are ideal for an international art exhibition. These heritage buildings can be elevated to international standards with a little facelift.

Biennale, however, would do well to have its own place to act as a permanent venue. The organisers can raise funds through a government grant, contributions from patrons, admission fee, catalogue sale and museum shop like Western biennales and triennales do.

Unfortunately, central and state governments have not been very sympathetic towards the Kochi-Muziris Biennale, which gave a fillip to the culture and tourism departments. The biennale should be conducted through a public-private participation model. The government should adopt a venue and entrust a trust or foundation to organise cultural events there. It can raise funds through renting stalls to artists from other countries. We can learn many such things from the Venice Biennale.

After Abul Kalam Azad and Humayun Kabir, no Union minister has taken an active interest in cultural affairs. In Kerala, after the lively days of Joseph Mundasseri, only M.A. Baby showed any interest in culture.

Tourism and culture ministers have a duty to develop Kochi-Muziris Biennale as a historical event. The exhibition can be a watershed event in Kerala’s cultural history.

The Sao Paulo Biennale, started in 1951, is the second-oldest biennale. Gwangju (South Korea), Sharjah, Istanbul, Berlin and Sydney are some of the most important.

Biennales and triennales have special characteristics. All of them carry the stamp of the culture of the host city and have become an integral part in their trade and tourism. The Italian parliament formed an administrative board in 1973 to look after the Venice Biennale. This board is authorised to nominate a president and separate secretarial directors for visual arts, cinema, music and theatre. The biennale was converted into a foundation in 2004.

Together, the European Union, Russia, Canada, Japan, Israel, the United States, Egypt and South Korea have set up 30 permanent pavilions at the Venice Biennale.

The biennale has converted Arsenale, a former ship yard and armoury, as an exhibition venue without tinkering with its originality. It also has several private exhibition venues.

(The writer is a sculptor, painter and former chairman of the Kendra Lalitha Kala Academy)