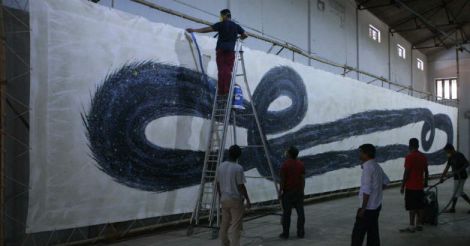 De-installing of artist N S Harsha's work 'Punarapi Jananam Punarapi Maranam' at Aspinwall House. Harsh is one of the artists who have donated their works for fundraising.

Kochi: India is set to witness one of the biggest art auctions early next week, as 40 internationally-acclaimed Indian artists have donated their works that will go under the hammer in Mumbai on April 7 to raise funds for the Kochi Biennale Foundation (KBF).

The auction is being conducted as part of Kochi Biennale Foundation’s efforts to create a corpus fund. According to officials, the corpus fund will help to make the Biennale self-sustaining and will largely help in dispelling organisational hitches.

The auction, to be held on April 7, is being held in collaboration with SaffronArt. The evening will start with a preview at 6:30 pm at the Taj Land’s End,Mumbai followed by registration at 7:00 pm and live auction at 8:00 pm.

In a bid to get more people to participate in the auction, the organisers have made the auction available online. Those who are unable to be physically present for the auction can bid online throughthe SaffronArt website or phone. The online auction is open now at http://www.saffronart.com/auctions/Kochi-Muziris-Biennale-Fundraiser-Auction-2015-3742 and will close after the live auction is complete. The organisers have also said that there will be no buyer’s premium on any of the lots.

Kochi Biennale Foundation has successfully organised two critically-acclaimed editions of Kochi-Muziris Biennale which has a combined attendance of nearly a million visitors. Although the Foundation has been receiving financial aid from the Government of Kerala, the delays in funding have affected the organisation of the event.

“Despite varied funding sources, securing adequate and timely funding continues to be a biggest challenge for future editions of the Biennale,” said KBF founder-president Bose Krishnamachari. “To form an essential part of a collective effort to ensure the sustenance and longevity of India’s first biennale, 40 artists have generously donated their art works for the fundraiser,” he added.

KBF co-founder and Secretary Riyas Komu said “the April 7 auction is a self-generated funding initiative where artists have come together to support the only biennale in the world that is conceived, led and curated by artists”.

The proceeds make a direct impact on the work the Foundation does on site to sustain the biennale,” added Komu, who also lives in Mumbai.

Navjot Altaf, whose installation 'Mary wants to read a book' was part of KMB '14 feels that the biennale is an artists' initiative and so artists should work collectively to bring contemporary art from around the world for the benefit of the people here.

"I like to support an activity like the biennale so that it continues in the coming years," said the Mumbai-based artist, who is donating a sculpture, 'Sirha', for the auction. "I was also impressed with how existing spaces were used for both editions of the Kochi Muziris Biennale, rather than building temporary structures that become a waste after the event. This is a good way of also involving owners of these spaces and local people in the event."