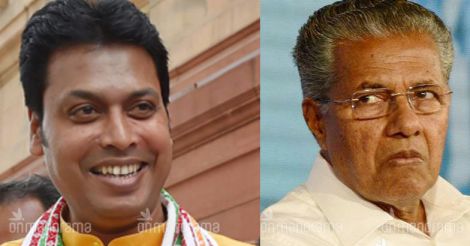 Biplab launched a scathing attack on the Pinarayi-led LDF government in Kerala.

Biplab was addressing a select civil audience here as part of the BJP's campaign for the Chengannur bypoll.

Recollecting his party's stunning victory in the Tripura state elections, Biplab launched a scathing attack on the Pinarayi-led LDF government in Kerala.

He said with a vote share of 16 per cent, the BJP in Kerala can easily sink the CPM. "If we could ensure the fall of CPM in Tripura though we had just 1.5 per cent of votes in the previous polls, you can do that much easily," he told party activists.

"There are lots of similarities between Kerala and Tripura. But there's one difference. Tripura has a BJP govt while Kerala is ruled by the CPM. Kerala will develop once the Communist govt goes," he said.

"The police killed Sreejith, a Dalit youth. In Manik Sarkar's constituency, a Dalit woman was raped and killed. He didn't visit her house. Because once he goes there, he will have to admit that it was committed by the CPM workers. If Pinarayi visits Sreejith's house, he will have to say that the crime was committed at the behest of the CPM," he said.