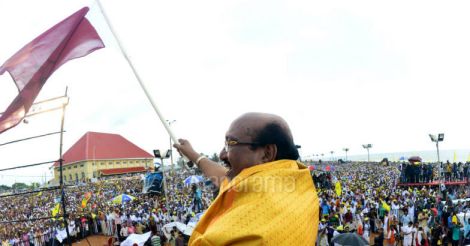 All three political parties have claimed the newly declared position will of advantage to them:Photo| Rinku Raj Mattancheriyil

Alappuzha: The Sree Narayana Dharma Paripalana Yogam (SNDP), a powerful outfit of the backward Ezhava community in Kerala, Wednesday said it would back the candidate who helps the community, in the May 28 by-poll to Chengannur assembly constituency.

"The candidate who helps and co-operates with the community will get our votes. We know very well who does so," SNDP general secretary Vellapally Natesan said, without elaborating.

The sub-committee of SNDP, formed to work out a strategy for the bypoll, took the decision.

SNDP's position assumes significance as its political wing Bharat Dharma Jana Sena (BDJS), is a partner in the BJP led NDA in Kerala.

CPM state secretary Kodiyeri Balakrishnan said the position of SNDP would help the LDF, but did not elaborate.

BJP state president Kummanom Rajasekharan said SNDP's position was a setback to both LDF and UDF, which had 'betrayed' the community over the years.

The Nair Service Society, another caste-based group, has also made it clear it would not take sides with any particular Front in the by-poll.

The outcome of the bypoll is unlikely to have any serious impact on the LDF government as the ruling Front has a huge majority in the assembly.

But the poll result will be widely seen as a referendum on the performance of the LDF government.

The CPM candidate in Chengannur is Saji Cherian, while D Vijakumar is the Congress candidate.

The bypoll was necessitated due to the death of CPM leader K K Ramachandran Nair.

BJP had finished a close third in the 2016 polls.