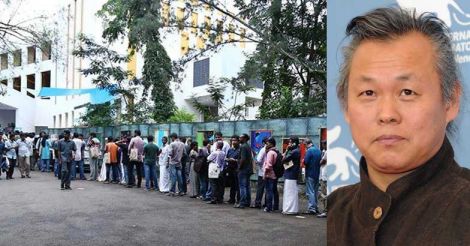 Thiruvananthapuram: An action-packed day four of the 20th International Film Festival of Kerala (IFFK) once again brought back the spirit of the festival, thanks to the proactive organisers and delegates. The fest has already gained positive response from majority of the delegates and guests as the shows ran without confusions or disruptions. Though delegates expressed anger over show changes at the last moment without proper intimation, the fest appears to be getting better each day.

The day's highlight was the 'Stop', directed by Kerala's favourite Kim Ki Duk. As expected, long queue was formed even hours before the show at Tagore theatre, the main venue of 20th edition of IFFK. For the first time in the 20th edition of IFFK, the officials and security personnel had a tough time managing the crowd for almost two hours.

Despite incessant rains, the delegates patiently waited to watch Kim Ki Duk's latest film. But the calmness slowly faded away. The movie began after the 'Open Forum' session in the theatre at 6.45 pm. Unlike the previous sessions, which were carried out with a few audience, mostly officials and professionals, Monday's session was houseful.

Marking a strong response against nuclear energy and the accidents caused by it, 'Stop' follows a couple who survive the Fukushima nuclear tragedy and leave for Tokyo, where they are caught in a dilemma—whether to keep or abort their baby over fears of radioactive contamination causing disabilities in the foetus. 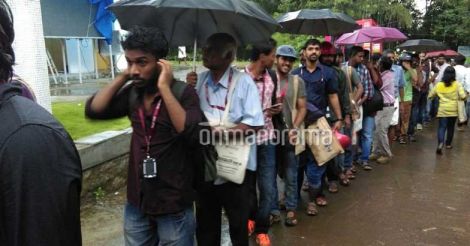 Unlike the excessive violence and obscenity attached to Kim’s film-making, 'Stop' comes as a different experience, where a social cause is discussed through a couple's perspective. The movie, which had been severely criticised by many film critics, seemingly failed to garner positive response from IFFK delegates too.

Meanwhile, at the Kairali theatre, everyone was excited to see Opposition Leader V.S. Achuthanandan, who came to watch 'Valiya Chirakulla Pakshikal' directed by Dr. Biju.

'Munroe Thuruthu' starts with the arrival of a young man and his father to Munroe island, his grandfather's abode. One of Malayalam’s most underrated actors, Indrans, excelled as the grandfather who tries to outsmart his eccentric grandson. The screening was attended by director, cast and crew of the movie. 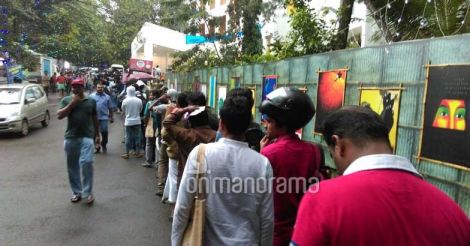