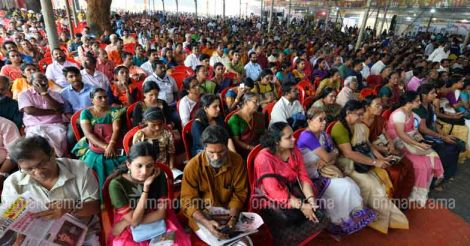 Thrissur: Several food stalls installed around the venues of the 58th edition of the State School Kalolsavam do not hold the required permission. The illegal functioning of the stalls have prompted the police to take strict action against their owners.

The police on Sunday, the second day of the five-day event, closed down several such stalls, including ice cream parlors, on the premises of the venues in Thekkinkadu maidanam for lack of license from the food safety authority.

A senior police officer told Onmanorama that they initiated the crackdown after they found that the eateries had not complied with the rules.

“Many such stalls had only a photocopy of the license issued to someone else. They failed to produce the license from the food safety commissioner despite giving them a day’s time,” he said.

He said the police did not want to repeat incidents of food poisoning that had cast a shadow over the school fest on some earlier occasions.

While there are eateries set up after acquiring necessary permission from the organizers of the Kalolsavam and paying the required fee, many have also installed makeshift stalls eyeing to reap rich dividend during the mega event. Food safety officers have not been available for comment.