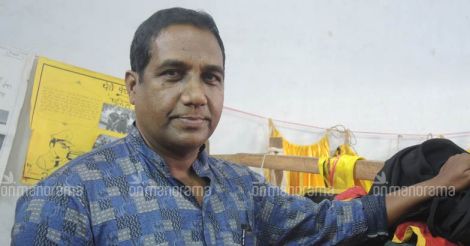 Thrissur: A creative mind caught stuck in a cop’s uniform has become a cliched caricature in popular Malayalam cinema. But Manaloor Gopinath, an assistant sub inspector posted with the Kerala police’s special branch here, is absolutely the real-life version of the creative cop. He is one of the leading Ottan Thullal artists in the district.

Three students who have been training under Gopinath participated in the Ottan Thullal contest in the ongoing 58th State School Kalolsavam here on Monday. In all, he has trained over 500 children during the past one decade with many of them winning top prizes in the school fests.

Gopinath’s interest in Ottan Thullal, a classical art developed by ancient Malayalam poet-satirist Kunchan Nambiar, began during his school days. Inspired by the performances in a temple near his house at Manaloor, Gopinath performed in his school when he was a student of class 3, without having any formal training in the art. His passion for Thullal grew along with him, but only after his studies at SN College, Nattika, that he could pursue some training in it at the Kerala Kalamandalam.

By the time he had also become a part of the Kerala police force. Gopinath credits Guru Gopinatha Prabha of Kalamandalam for his growth as a Thullal artist. However, he traces his early interest in arts to his father who used to narrate the stories from Ramayana to him and his siblings.

“My colleagues are very supportive. The department has also given me the permission to perform on stage,” Gopinath told Onmanorama on the sidelines of the Kalolsavam.

He goes on to say that the police parades have also helped him improve his sense of rhythm which is an integral part of a Thullal artist’s success.

He is due to retire in March and after that he is planning to devote the rest of his life for the art form. “I train around 40 students at my house now. After retirement, I’m planning to set up a kalari (training center) near my house,” he said.

Gopinath was so overwhelmed by education minister C Raveendranath’s call to make Kalolsavam a true festival rather than a competition that he distributed over 2000 unniyappams to all those present at the Ottan Thullal venue on Monday.

Though Gopinath does not have any familial background in Thullal, he has passed it on to the next generation. His son Babil Nath, a physical education instructor at a school in Thrissur, plays ‘mrudangam’ for Thullal performances and does the make-up. His daughter Babitha is also a Thullal performer. His wife Baby also accompanies him to the performances and is a great admirer of his art.

Read: Latest Kalolsavam news | Too much drama on stage, less realism on the ground