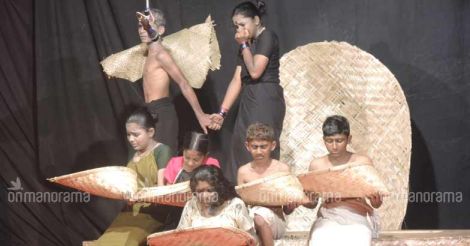 While there were only 14 entries originally, the teams who made it to the state fest through appeal raised the number of contestants to 27.

Thrissur: There was too much drama in the drama competition for high school section in the ongoing 58th State School Kalolsavam here on Sunday as the event lasted for over 18 hours.

While there were only 14 entries originally, the teams who made it to the state fest through appeal raised the number of contestants to 27.

The competition, one of the most crowd-puller events of the festival, began at 10.30 am, around one-hour-and-a-half late, at the proscenium stage of the Kerala Sangeetha Nataka Academy. The contest lasted till 6 am on Monday, leaving judges, audience and participants exhausted.

The choice of the stage proved to be a flawed decision as soon as the competition began with many finding it difficult to find a seat. All the entrances were blocked with rushing audience and many had to sit on the floor for hours. The flaws in the sound system also played spoilsport. The use of just two mikes in the traditional style often failed to capture the dialog.

Lack of adequate air-conditioners added to the woes of the audience who were seen using newspapers to cool themselves.

Many who watched the plays opined that the event should have been held on a bigger venue where more people could be accommodated. “Drama contest is a crowd-puller every year. The organizers must have been careful while fixing the venue,” Lijin, an amateur theater artist said. 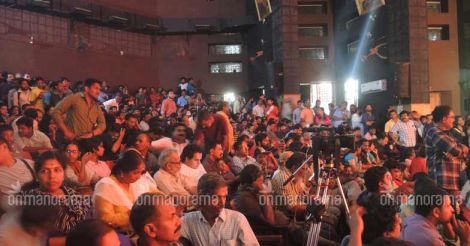 Lack of adequate air-conditioners added to the woes of the audience who were seen using newspapers to cool themselves. Photo: G Ragesh

Though an LCD screen was installed at the Murali Memorial open theater behind the stage for live-streaming of the plays in the afternoon, it was not enough to satisfy the passionate theater lovers who had gathered here. By and large, the organizers have not been realistic enough to anticipate the issues that erupted during the long hours.

Of the 27 plays, a few captured the imagination of the audience with the brilliant choice of themes and neat employment of theatrical techniques and stunning performances. Plays such as ‘Elippetty’, ‘Maradona’, ‘Meeshakkatha’ and ‘Aazhakkinar’ remained brilliant pieces of children’s theater while a few others tested the patience of the audience with the amount of cliché they contained.

Elippetty was appreciated for the way it critiqued the modern education through the charged performance of the actors, while ‘Maradona’ received standing ovation for the way it handled the issue of gender sensitivity. The play, which has the character of a transgender kid in the lead, was marked for transforming the stage into a football ground.

The contest witnessed the adaptation of several literary texts. The play based on Santhosh Echikanam’s well-read short story ‘Biriyani’ was received with much applause. ‘Maradona’ found its roots from P V Shajikumar’s short story with the same title.

M Mukundan’s story ‘Achhan’, portraying the fate of a man who is falsely accused of raping his daughter, was adapted onto the stage with the same title.

As results were announced, some theater artistes alleged that the jury had failed to evaluate the productions from a perspective of children’s theater. “The jury used the same yardsticks of professional theater to assess the plays. It’s a bad trend and it will do no good for the growth of children’s theaters,” one of the directors of the contesting plays told Onmanorama on condition of anonymity.