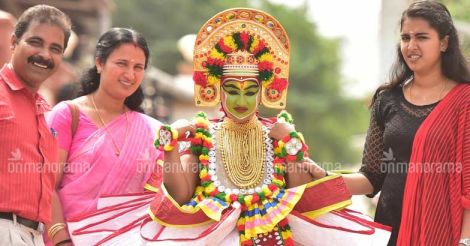 Thrissur: Two decades ago, when lightning and rain wiped out a family, Sreeja was left alone in this world. Rescued from the debris, she was adopted by the state government and she grew up as its daughter.

Today, when her 14-year-old moves her feet in rhythm on the school festival stage, Sreeja's eyes are moist, recalling how her daughter is wiping away the memories of a night that destroyed her entire family when she was just 14.

On July 20, 1994, Sreeja's parents, two brothers and younger sister died in their sleep when a huge jack fruit tree fell on their house in Kasaragod's Aninja.

On the request of the then district collector Mara Pandiyan, the Karunakaran government adopted her. She continued her studies, got a job in the taluk office, got married to a teacher, Vinod, and has two daughters -- Srilakshmi and Meenakshi -- who are doing well in arts.

We suffer every disaster not knowing that time has the remedy for every heart-breaking pain, reminisces Sreeja.

Meenakshi, who is a class IX student of Kanhangad Durga HSS, has received A grade in Ottan Thullal. She was to take part in Thiruvathira on Tuesday. Though she is participating in the school festival for the first time, she has won several prizes in district and sub-district levels.

Her elder sister Srilakshmi is also an A grade winner in Ottan Thullal. She had also won the first prize in the regional painting contest held as part of the Kerala State School Sasthrolsavam last year.

Sreeja's husband Vinod, who teaches at Ayyangad Government HSS, is also an Ottan Thullal artist. The parents make sure that they there to see all the performances of their kids. And enjoy every moment of it.