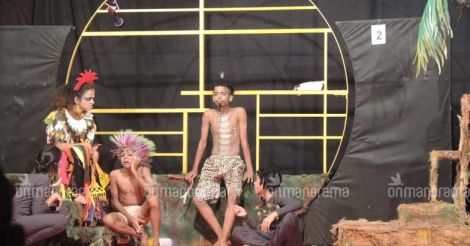 The play left the audience in huge rounds of laughter with its texture of humor before provoking their thoughts ahead of the curtains coming down. Photo: G Ragesh

Thrissur: Of the many plays that were staged at the 58th State School Kalolsavam here, ‘Elippetty’ (rat trap) by Government Higher Secondary School, Thiruvangoor, Kozhikode, stands out as a perfect example of children’s theater. Written and directed by Sivadas Poyilkavu, a teacher of English at the school, the play emerged a favorite of the audience for the way of presentation and addressing a relevant theme in a subtle manner.

Through the life of beings such as a snake, a hen, two rats and a porcupine who lives on the premises of a woman named Sakunthala, the play addresses the issue of socio-economic divisions in society that gets increasingly reflected in our education system.

The play left the audience in huge rounds of laughter with its texture of humor before provoking their thoughts ahead of the curtains coming down.

Elippetty’s intriguing plot revolves around the porcupine’s plans to eliminate the other inmates of the compound. Though a retelling of the much-voiced call for ‘unity in diversity’, the play evolves to be a brilliant piece of allegory on stage through the employment of innovative theatrical elements coupled with energetic performances.

Sivadas, who has directed eight plays for Color Box, the school drama club, believes that production of a children’s theater is not a child’s play. “We should not impose a written script on the children. Instead, I choose to sit with them and discuss the script. We should take as much inputs as possible from them. They should have a feeling that the play has emerged from within themselves,” he told Onmanorama.

Sivadas' stress on creative acting, wherein the kids are allowed maximum freedom to perform, was evident from the easiness displayed by each actor.

“During the rehearsals, I choose to strike off any dialog that sounds difficult to the actors. Similarly, I try to involve the students maximum while composing a play’s music and designing properties,” Sivadas said.

Elippetty was first staged after 12 days of rehearsal. Sivadas is planning to hold workshops for the children during the summer vacation and elaborate the play and perform it on other stages.

Read: Kalolsavam news | Maradona is not child's play for these kids