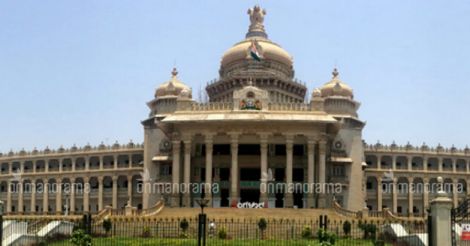 The court also noted that several regional channels will be provided with live feeds for the telecast.

New Delhi: The Supreme Court on Saturday ordered live telecast of the crucial floor test in the Karnataka Assembly to ensure 'transparency' in the trust vote in which chief minister B S Yeddyurappa will have to prove his majority in the House.

The apex court, which said that 'live telecast would be the best possible way to ensure transparency in the proceedings', also made it clear that 'there shall be no other item in the agenda that shall be taken up during the trust vote today'.

The order for holding the live telecast was delivered after the Congress-JD (S) combine expressed no objection to the suggestions made by the Karnataka government and governor Vajubhai Vala in this regard.

"What more do you want? It will be as transparent as you want. It will be live telecast. Now, it solves your concern. Live broadcast of floor test will be the best possible way to ensure transparency in the proceedings," a special bench of justices A K Sikri, S A Bobde and Ashok Bhushan told the counsel appearing for the alliance.

The bench said secretary of the assembly will record the proceedings of the House.

It said several local channels will be provided the live feed of the proceedings so that they can also be in a position to telecast simultaneously.

The bench termed as 'fair' the suggestion of Additional Solicitor General Tushar Mehta, appearing for the governor and Karnataka government, that the floor test would be telecast live.

Elections held on May 12 to 222 of the state's 224 seats have resulted in a hung Assembly with the BJP having 104 MLAs, while the Congress won 78 seats and JD(S) 37. Polling in two seats will be held later.

The Congress-JD(S) combine has claimed the support of 117 MLAs, including one from the BSP, and two others.

The JD(S)' effective strength will be 36 at the time of voting, as its leader H D Kumaraswamy has won from two seats. This will also reduce the strength of the House to 221 and the BJP will require 111 votes for a simple majority.

The bench was hearing the plea moved on Friday night by the combine challenging validity of governor's order appointing BJP MLA K G Bopaiah as the pro-tem speaker of Karnataka assembly by ignoring the convention of appointing the senior most member in the House.

After the statement of Mehta, senior advocates Kapil Sibal and Abhishek Manu Singhvi, appearing for the combine, preferred not to press for the removal of the pro-tem speaker.

While Bopaiah was a four-time MLA, the combine was clamouring for appointing Congress MLA R V Deshpande who has made it to the Assembly for the eighth time.

The bench, during the 34-minute hearing that commenced at 10.36 am on a holiday, noted the submissions of Mehta that a decision was already taken that there would be live telecast of proceedings in the Legislative Assembly in respect of the floor test.

Senior advocates Kapil Sibal and Abhishek Manu Singhvi, who were appearing for JD (S) leader H D Kumaraswamy and the combine respectively, changed their strategy after justice Bobde observed that Bopaiah would have to be heard before passing any such order and in that case, the floor test has to be postponed.

"If you want us to examine the suitability of the (pro tem) speaker, then notice has to issued to him and he has to be heard. Then in that case, the floor test will have to be deferred or postponed," Justice Bobde said when Sibal referred to an earlier apex court verdict and claimed that Bopaiah, who was the speaker of the Assembly in 2010, had "manipulated" the majority for the then government.

Sibal referred to the governor's order under Article 188 of the Constitution and said Bopaiah has been appointed "as the person before whom a member of the Legislative Assembly shall, before taking his seat, make and subscribe an oath and affirmation".

He said that the notification refers only to the fact that Bopaiah would administer oath of office to the MLAs and it does not specify that he would be conducting the floor test as the pro-tem speaker.

"Then who will conduct the floor test?," justice Sikri asked Sibal who responded by saying that the court "can direct the Governor to appoint the senior most member as the pro-tem speaker. It is the convention followed even in Commonwealth countries".

The bench shot back, "It is a convention only. We cannot do it (direct governor to appoint senior most member as the pro tem speaker). Conventions are not rule and they cannot be the law".

When Sibal referred to one of the prayers in the application which sought a direction to conduct the floor test through a 'division' into separate and segregated lobbies so that the MLAs in different lobbies can be counted in a transparent manner, the bench observed, "that was the request made to us (during Saturday's hearing) and we had declined".

Senior advocate Mukul Rohatgi, representing Yeddyurappa, objected to their application saying, "They cannot go on making applications after applications everyday. They are going on as if the Supreme Court is sitting and waiting for them".

When Sibal and Singhvi, who were pressing for video recording of floor test, agreed to Mehta's suggestions, the bench told Mehta, "Thank you very much for coming out with something which we had in our mind".