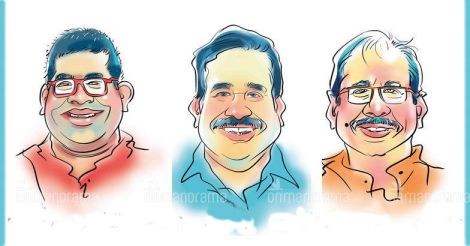 K.N.A. Khader had visited Russia to study about communism when he was a member of the Communist Party of India. He kept his reputation as a knowledgeable leader even after he switched sides to the Muslim League. He kept writing books and columns from a different perspective.

Khader has been dabbling with medicine of late to better understand the numerous medico-legal cases he has to handle as an advocate.

Khader’s main rival in the assembly by-election in Vengara, P.P. Basheer, is no less an academic. He had his eyes set on a doctorate in law when he joined a masters course in law. He could not complete the course but he more than made up by pursuing a masters degree in human rights from the Pondicherry University.

Vengara is all set for the first assembly by-election since the LDF came to power in May 2016. The constituency has been monopolized by Muslim League’s P.K. Kunhalikutty ever since it was carved out in the constituency delimitation of 2008.

The by-election was necessitated by Kunhalikutty’s election to the Lok Sabha as the late E. Ahamed’s successor in the Malappuram constituency five months ago.

Muslim League’s challengers have an uphill task. Kunhalikkutty had polled 72,181 votes in 2016, 38,057 votes more than Basheer. Even in the Malappuram by-election, the Vengara assembly segment presented Kunhalikkutty with the highest lead.

Both Khader and Basheer are experienced warhorses. If Basheer had represented CPM in the previous assembly election in Vengara, Khader is preparing for his fourth assembly election. Janachandran will be contesting for an unlikely entry to the assembly for the fifth time.

Khader’s maiden election to the assembly was in 1982 when he was still with the CPI. He lost to Muslim League leader K. Avukkader Kutty Naha in Thiroorangadi. Five years later, while serving as the CPI’s Malappuram district secretary, Khader joined the Muslim League. He was elected to the assembly from Kondotty in 2001 and Vallikkunnu in 2011.

He has worked as the Muslim League’s state secretary and district general secretary.

Basheer is an advocate by profession. He took a drubbing in his maiden election in 2016 when Kunhalikkutty romped home with a monstrous margin. The advocate is a member of the CPM’s Thiroorangadi area committee. He was a former member of the A R Nagar panchayat.

The BJP candidate is a retired teacher. He has fought four assembly elections and four Lok Sabha elections in a career that started with the Janata Party in 1977. He was the panchayat president in Tanur in 1977. He is now a member of the BJP national council.

K.C. Nazeer of the SDPI and A Bhuvanachandran of the Shiv Sena are also in the fray. The Welfare Party has opted out of the race this time.

Vengara assembly by-election was no surprise yet the major parties were not ready with their candidates until the last minute. The CPM dillydallied with the idea of fielding an independent candidate acceptable to all sections of society before settling on Basheer.

The Muslim League leadership had a tough time deciding between Khader and P.U. Latheef. The BJP could not decide on a candidate before the last date for filing nominations.

Stakes are high here. Both CPM state secretary Kodiyeri Balakrishnan and CPI state secretary Kanam Rajendran have said that the by-election will not be an evaluation of the LDF government’s performance. Opposition leader Ramesh Chennithala termed the statements as a reflection of the ruling coalition’s insecurity.

Results on October 15 will provide the answers.

The UDF wants to go to the polls highlighting the “fascist attitudes” of the BJP-led government at center and the “anti-people” policies of the CPM-led government in the state. The LDF goes to the people for a mandate to strengthen its fight against the BJP and to salvage the assembly constituency from “years of stagnation” under the influence of the Muslim League.

The NDA is trying to project the central government schemes.

The assembly segment comprises six panchayats. Oorakam, Othukkungal and A R Nagar panchayats are ruled by the UDF. The Muslim League rules the Vengara panchayat without any partners and wrested power in the Kannamangalam panchayat with help from a section of the Congress.

In Parappur, a curious combination of the CPM, SDPI, Welfare Party, PDP and a section of the Congress is in power.