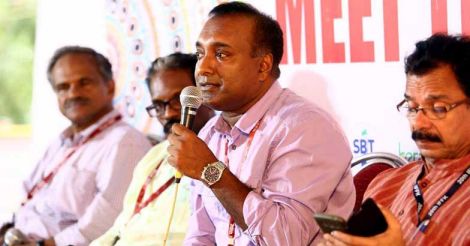 Thiruvananthapuram: A man feels disgusted by his own urine, and thinks it is dirty. He takes steps to make amends. Why do you want to make a film about it - to inform people that Obsessive Compulsive Disorder (OCD) can be treated with love.

This is the true story of Vindana Ariyawansa from Sri Lanka, told in a film by himself and his brother Kalpana Ariyawansa, both debutant filmmakers.

"Dirty, Yellow, Darkness" (or "Premaya Nam…" in Sinhalese) tells the story of a man with OCD, whose wife has left him. The man who fears his own urine gets himself admitted to a mental hospital to overcome his fear and win his wife back.

Kalpana Ariyawansa, in an interaction at the Tagore Theatre during the ongoing 20th edition of the International Film Festival of Kerala (IFFK), said he felt he needed to tell this story of mental illness in his own country.

OCD is a mental disorder in which a person feels the need to check things repeatedly, or have certain thoughts or perform routines and rituals over and over.

"We needed to tell this story in Sri Lanka because cases of mental illness remain hidden there," Kalpana said.

"We wanted to tell the people that there is a mental health institute there, and please go and get help.

"We wanted to show that with care, love and determination, you can get better," said Kalpana.

The main character in the film suffers from OCD, and his wife leaves him. "His life falls apart, and he is determined to get her back."

The title "Dirty, Yellow, Darkness" refers to the man's feelings about urine (which is yellow in colour), which he thinks is "dirty", and thus he lives in a complete state of "darkness".

The tile in Sinhalese "Premaya Nam…" (Love is…), however, refers to the need of more love to treat OCD, he said.

The film, which cost the brothers Indian Rs.65 lakh, was "well received" by the audience and they "embraced it".

Yet to be released in the island nation, the movie has been shown in film festivals in Colombo, Jaffna and Shanghai, besides now in Kerala. "We have got amazing feedback from the audience," he said.

Asked about how their family reacted to the film, Kalpana said: "It was actually our father's idea, when we were looking for a story.

"The family admires us… and the courage of my brother. People were very happy that we brought this to the world."

Bijukumar Damodaran, a homoeopathic physician-turned-filmmaker from Kerala who has made a movie on spraying of endosulfan pesticide in Kasargod and its ill effects, spoke about OCD treatment.

"There are a lot of medicines in homoeopathy to treat OCD, and Kerala doctors are treating many cases now," he said.

Kalpana also spoke about the prospects of filmmaking in Sri Lanka.

"We made a low budget film, but nowadays, a commercial film in Sri Lanka costs about Rs.3-4 crore.

The debutant filmmaker, however, lamented the slow growth of the film industry in Sri Lanka.

"The industry is not so developed as in India. We have to come to Chennai for post-production work such as sound mixing," he said.

"If you want to shoot a film in Sri Lanka, please come prepared after doing research," he added.