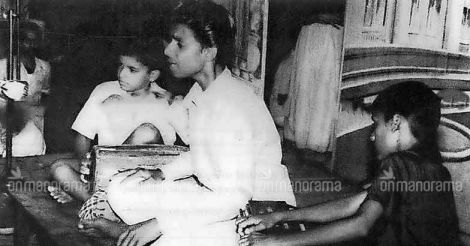 If you know the boy on the harmonium, let us know on onmanorama@mm.co.in.

Thrissur: The black-and-white photograph of three child prodigies squatting on a humble stage and mesmerizing the audience with their performance during the second edition of the State School Arts festival held in Thiruvananthapuram has always triggered memories and reminiscences among Keralites of a bygone era.

The singer in the vintage photo was K J Yesudas while the chubby boy who accompanied him on mridangam was P Jayachandran, who went on to become defining voices of Malayalam cinema music. The photo was clicked when the duo, who had won prizes in light music and mridangam competitions respectively, performed together during the closing ceremony of the fest conducted in 1958.

However, nobody could identify the third boy in the photograph, who was seen playing harmonium by their side.

Finally, after living in ‘obscurity’ for forty-two years, nagaswaram exponent Thrissur P. Govindankutty has revealed that it was him who shared the stage with Yesudas and Jayachandran at the event.

“Yesudas was the winner in the Carnatic music event in which Govindankutty finished second. During the prize distribution ceremony, Yesudas was invited to the stage to perform the prize-winning item. The organizers also asked Govindankutty to accompany him on harmonium. That’s how he got a chance to be a part of that historic moment,” said one of Govindankutty’s relatives.

Govindankutty, who has been playing nagaswaram for several decades at the Paramekkavu Bagavathi Temple, was one of the most sought-after drama music composers in Kerala in the 70s. Better known by his pseudonym G K Poothole in the theater circles, he has worked closely with many top troupes in the state.

Govindankutty, whose playing of nagaswaram strictly adhered to the algorithms of theory and notation, has been very popular among traditional music lovers in Tamil Nadu as well.

Despite all these achievements, Govindankutty has always maintained a low profile. It was evident from the fact that he chose to shun the limelight by ignoring the requests from his relatives and friends to identify himself in that historic photograph.

“Friends and relatives had compelled me to break the suspense when the photograph became a hot topic of discussion. Both Yesudas and Jayachandran had become very popular by then. So I felt it was not the right thing to do,” said Govindankutty.

“I was studying at the Vivekodayam school in Thrissur when I took part in the Carnatic music competition at the second School Arts Festival in Thiruvananthapuram. Jayachandran had competed in the percussion instrument event at the Irinjalakuda sub-district competitions. At the state fest, I sang a keerthana in Panthuvarali raga. Though the runners-up were not given any prizes then, I was invited to the stage to perform as a gesture of encouragement,” he said.

Govindankutty learned music at a tender age from his father P Sankaran who was a nagaswaram maestro. He has worked as music teacher at different government schools in the state. Apart from scoring music for dramas, he has composed light music for Akashvani and has cut two Hindu and Christian devotional albums.

“I had met Yesudas and Jayachandran several times after that photograph became popular. I did not discuss it with them as I felt it was not a big deal,” he said.

Govindankutty’s brother and daughter has won prizes at school art festivals by performing the songs composed by him. He has also been a judge for music competitions at the fest.