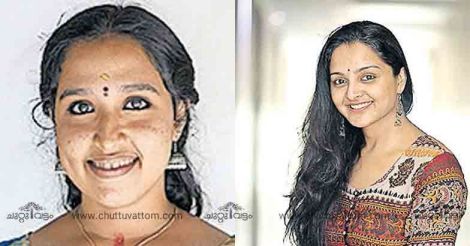 Chandana Rajendran from Vaduthala Jama-ath Higher Secondary School, who got an A grade in HSS kuchipudi and folk dance in the 58th Kerala State School Festival being held in Thrissur, is on cloud nine.

"Immediately after I won, Manju chechi (Manju Warrier) called me on phone. 'I am happy for you; we need to win in state-level too,' she told me. Chechi was happy that I won in both kuchipudi and folk dance," says Chandana.

"For the last four years, Manju chechi has been sponsoring me. She is financially supporting 10 students, including myself. Last year, I came first in the state. Geeta Padmakumar is my dance teacher," she says.

"Folk dance is taught by Saji Varanad-sir. Saji-sir wrote a special song and got it recorded for me. The songs set by the Saji-sir were used for most students taking part in the competition."