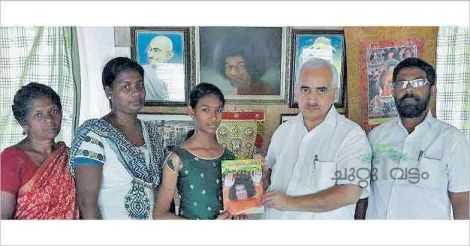 Souparnika comes from a family with limited financial resources, and the Sri Sathya Sai Orphanage Trust will build a house for her. Photo: Malayala Manorama

Since she comes from a family with limited financial resources, the foundation will build a house for Souparnika, said its executive director K N Anandkumar. Souparnika is a student of Thonnakkal Government GHSS.

Manorama had reported the plight of Souparnika who had no money to take a room on rent and had to spend the night on the stage. On seeing the report, the foundation came forward with the help.

The foundation will be build a house on three cents of plot near the Sai village in Thonnakkal. Besides this, the trust will take care of the education expenses of Souparnika.

Earlier, Malayala Manorama Nallapadam had announced that it will offer scholarship for Souparnika's art and cultural studies.

Souparnika came to Thrissur to take part in the folk dance competition along with her father, mother and younger brother. Since they didn't have enough money to pay Rs 800 as room rent, they spent their night on chairs on the stage.

They used the public washroom for their morning routines and changing clothes. Since she was the lone student from the school, there was no teaching staff along with her. Her father is an auto driver, and his meagre income is hardly enough to fund her dance training.

Since they don't have any land or house of their own, they live in the ancestral family house. Souparnika's dance training is sponsored by relatives and teachers.

Since the amount given by relatives were not enough, they had to pledge the gold chain of her mother to attend the school festival. Souparnika, who put her best foot forward on the stage amid her struggles, is returning with an A grade. The A grade has the added shine of the promise of a house.