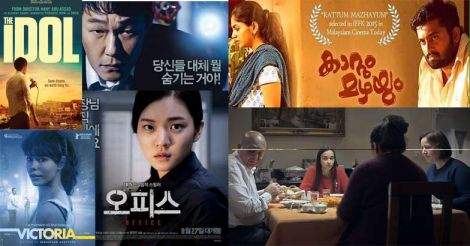 Valayil Maliyekkal Abdul Rehman Haji is diagnosed with a malignant tumour in his liver. The only possibility for a cure is a liver transplantion. As none of his chilren are ready to donate their liver, Jayanarayanan Namboodiri, who is a priest from a poor family, comes forward to donate his liver as he needs money to pay-off his debts.

The movie, shot in a single take without any cuts, is about woman who meets four Berliners outside a nightclub in Germnay and their adventure. The thriller won many international awards including Prize of the Guild of German at Berlin International Film Festival.

The movie is about how a boy from Gaza became a glimmer of hope, uniting the divided Palestinians. The film is about the popular Palestinian singer Mohammad Assaf. It show the his adventures from childhood to adulthood, and his life in Gaza until he won the Arab idol.

Office is a clever genre film that was shown at the Midnight Screening at the 2015 Cannes Film Festival. The Korean thriller is about Kim, who disappears after apparently killing his entire family. The mystery continues as video surveillance shows Kim entering the building after the killings but there is no record of him leaving. While the office workers become increasingly agitated, another murder is committed in the building.

Mahir, a famous musician, has been having a secret romantic relationship with his daughter’s friend Duru. The product of an old-school notion of what roles men and women should play in society. He takes his daughter to the gynaecologist regularly to assure himself that she’s a virgin and therefore marriageable. But conservatism doesn’t preclude hypocrisy: Ali has secrets of his own.