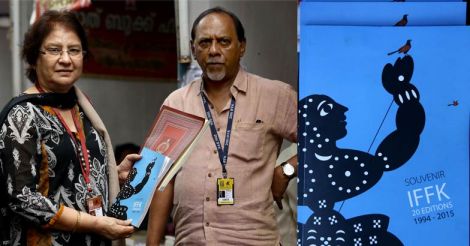 Thiruvananthapuram: A souvenir of International Film Festival of Kerala (IFFK) has been released on Wednesday, marking a grand completion of two decades of the festival. The Kerala State Chalachitra Academy released the bilingual souvenir that takes a trip down memory lane by covering the prospects and challenges right from its first edition.

"After browsing through the book, I noticed that how young we were when working for the festival in the past years," said former artistic director of IFFK Beena Paul. "Now, we are grey-haired but still the memories of the festival are fresh."

She also shared few instances on the communication modes with the international festival curators during the early stages of organising IFFK. "Once, I read an article on African cinema written by curator June Givanni. Later, I sent her a letter seeking for support for curating African and Latin American movies," recalled Beena, an award-winning film editor.

The 242-page magazine, which also takes a peek at national and international film festival circuits, also narrates the history of IFFK through photographs from the very first edition, which was held at Kozhikode up-state.

Noted filmmaker C S Venkiteswaran, who is also the editor for the souvenir, said the publication reviewing 19 years of IFFK was a humble attempt to compile the memories and images of celebrations. "We aim to provide the glimpses into some of the most memorable moments from its past," he added.

The booklet traces through the history of conceiving festival bird ‘Crow Pheasant’ and also the sideline-events like ‘Open Forum’ and ‘Meet the Director’.