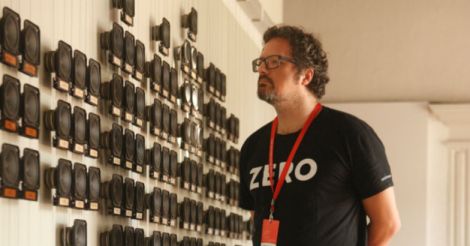 Kochi: It is difficult not to bring up Nobel laureate and popular Mexican ambassador to India Octavio Paz in relation to Kochi-Muziris Biennale 2014’s Mexican-Canadian artist Rafael Lozano-Hemmer. Not only because the celebrated Paz is widely-translated into Indian languages and he started the now-defunct Triennale, but because he is also the uncle of Lozano-Hemmer.

“I first interviewed him when I was 18 and I met him a few times after that,” says Lozano-Hemmer. “My romanticism on India comes from him. He always spoke with reverence about this country.”

Lozano-Hemmer creates pioneering technology-driven installations that include and work through his audience. And there is a politics that never escapes his works, much like his the late legendary uncle who essayed his concern for the people through writings.

For KMB ‘14, the artist plays with a relatively new concept — “speaker as pixel” — where speakers are arranged country-wise in sets according to their military spending with relation to their GDP. They are fixed with motion sensors that detect the presence of a visitor and the country’s names light up and they play the national anthems corresponding to the visitor’s movements, letting out an indecipherable cacophony.

“This is my latest obsession…. I am researching the density of sound through the cacophony that is created,” says the 47-year-old artist, who feels that this biennale is a paradise for artists. “I was very excited to come to Kochi and work in the context of the show,” he adds. ‘Pan-anthem’ is a new work that Lozano-Hemmer has designed to “make tangible the statistics that run our world”.

‘Pan-anthem’ arranges countries, represented by speakers playing national anthems, in sections according to their military spending, with the lowest spenders — Congo, Madagascar and Timor Leste — starting at the left and graduating to high spenders — the US, Oman, Israel, the UAE, Singapore and Saudi Arabia. Indian comes within the $31-$47 million spending bracket, while Pakistan comes in the $73-$118 set.

While it seems like a political work, the artist says that “this is just an experiment with data; my work does try to make links to social and historical issues, but this is not the main focus”. Over the years, the artist has been commissioned to create interactive technology-driven works in Mexico City's Zócalo Square to commemorate the year 2000, in Europe and the US, that end up making sometimes humorous statements about anti-consumerism or people’s interactions with each other.

The artist concedes that technology has a powerful influence on art. “Our culture, politics and lifestyles are managed through global networks of communication. Technology is not optional, but a part of us; so the natural thing is to use it. When I involve people, it is completely uncertain what the piece might be. But I want it out of my hands.”

Biennale curator Jitish Kallat notes that in “Lozano-Hemmer’s interactive sound installation, the statistic is held up as a tool for reflection. The piece is a mediation on the collective investment we make into our own annihilation, but foregrounds each nation's per capita investment in military expenditure.”

From a curatorial perspective, the piece is displayed at David Hall which during the Dutch occupation was believed to be used to accommodate military personnel. Historically, Parade Ground where David Hall is located was used by the Portuguese to store their armaments, and by the Dutch and the British to conduct military drills and parades.

Lozano-Hemmer’s work is partially supported by the Mexican Embassy in India and Ambassador Jamie Nualart accompanied the artist on his visit here. “It is a work of extraordinary talent, creativity and politics,” says Mr. Nualart. “It is full of surprises.”

He was also appreciative of the consistency of the biennale achieved through the "value and significance of artists who are here."