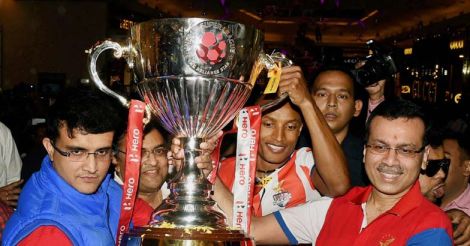 Kolkata: Amid spraying of champagne, thousands of fans turned out on the streets and in a mall to accord a tumultuous welcome to the players of the inaugural Indian Super League (ISL) champions Atletico de Kolkata (ATK) who arrived here with the trophy on Sunday.

An elated team management announced that each of the footballers would be given $15,000 (Rs 9.50 lakh) as a special bonus for their feat.

The team, scheduled to arrive around noon, reached the NSCBI Airport here one and half hour late without several players including the only scorer of the final Mohammad Rafique, who had missed the flight from Mumbai.

Emotive and euphoric fans showered petals, garlanded the players and smeared them with colours as the players trooped out of the domestic terminal carrying aloft the trophy.

"It is an extraordinary win. It is the first edition of the tournament and Kolkata have won. What more could we have asked for," said ATK co-owner and former Indian cricket captain Sourav Ganguly.

Asked to compare between the Natwest trophy, which the Indians won at Lords and the ISL triumph, Ganguly replied: "Both are great victories. No doubt there were many people at the Lord's but here Kolkata have won the first title. I'm extremely happy".

Brimming with confidence at his team's success, Ganguly said ATK would win more laurels in the coming years and promised to make a stronger team in 2015.

"This is just the beginning. We will win many trophies in future. I'm very happy for Kolkata, we will make a stronger team next year."

Rafique, whose 94-minute header sealed the deal for Atletico in the final, bagged the prize for the hero of the match.

The award for the best player of the tournament was given to the Brazilian mid-fielder Elano Blumer who shone throughout the tournament, netting eight goals for his side Chennaiyin FC. Blumer however, donated the prize money for the development of football in India -- a brilliant gesture from the 33-year-old.

The prize for the tournament's best goalkeeper was taken home by Czech Jan Seda of FC Goa, while Delhi Dynamos was awarded the Fair Play trophy.

The award for the emerging player of the league went to the 21-year-old defender of the Blasters, Sandesh Jhinghan.

Greece's medio Kostas Katsouranis, who turned up in Pune colours this season, got the award for the best goal, for scoring a brilliant 30 yarder in their win against Atletico in the first leg of the group stage encounter in Kolkata.

The Hero of the League award was given away to the Canadian forward of Kerala, Iain Hume for his five goals and three assists.

The other awardees for the final were the Atletico custodian Edel Bete for the best save for thwarting Englishman Michael Chopra's shot.

Spanish defender for Atletico ATK Josemi got the fittest player of the match.