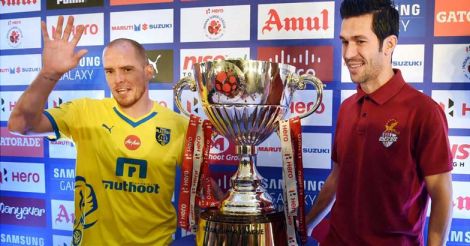 Mumbai: Is there anything that the Keralite seeking better prospects outside his home state has found impossible to achieve? The answer is, virtually nothing. Even if Keralite members are a minority in the team, the address of the Kerala Blasters team that takes the field on Mumbai soil to play the first ever ISL football final on Saturday will firmly be that of the land of Malayalam. David James’ team believes that they will win today and lay claim to the Cup. Fans from Malappuram and Kannur, keeping the same faith, have started pouring in.

It is not just Malayalis who root for the Kerala Blasters taking on Atletico de Kolkata at the DY Patil stadium in Mumbai today. Football fanatics among the Mumbaikars will also be present to cheer Sachin Tendulkar’s team. The Goans have arrived too. There is excitement everywhere. Today’s final is a historic one. The encounter will be closely followed by all.

Blasters is the team that has conceded the least goals in ISL. Some of the names that were pivotal in the defense, like James McAlister and Gurwinder Singh, will be missing from the lineup today. Colin Falvey, Sandesh Jingan and Nirmal Chetri will take the field instead. Team management has hinted that Frenchman Cedric Hengbarth who stood like a pillar alongside Falvey in many matches will play today. Hengbarth had missed the semifinal due to injury.

Who will score first?

Blasters’ supporters would like them to score the first goal. If so, then who will it be? Ian Hume, why doubt at all! Or will it be Michael Chopra? Chopra who has sweated it out from the time the first whistle blew in the second leg of the semifinal till the end of extra time is doubtful about appearing today. He did not have much practice yesterday and was seen happily roaming the team hotel. Hume is the trump card even today.

The battle in the midfield

Kolkata has the renowned Luis Garcia to plot and lead attacks. At first glance it will seem like the battle will be between Blasters’ Pierson and Garcia. But today Pierson will be in the garb of an attacker. For the same reason, Garcia’s role will not be to contain Pierson. Sparks are bound to fly when the two come face to face.

Who will man the goal?

All three goalkeepers of Blasters were active in yesterday’s practice session. David James, Sandeep Nandy and Luis Barreto trained with gusto. The anxiety level in the supporters rises up for the same reason.