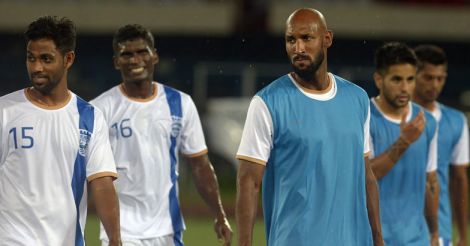 Mumbai City FC's Nicolas Anelka, centre, participates in a training session with team-mates in Kolkata. The Frenchman will be missing in action on Saturday owing to a ban. File photo: AFP

Mumbai: In what could be termed as the Maharashtra Indian Super League derby, Mumbai City FC and FC Pune City will lock horns here on Saturday with both teams seeking a win after an unimpressive starts in the franchise-based football tournament.

Both were winless in their lung openers played away from home even though Pune emerged with a single point after the goalless draw against Delhi Dynamos while Mumbai were thrashed 3-0 by Atletico de Kolkata in the inaugural match.

Both teams, thus, would be eager to get their campaigns back on track with a victory in front of a big crowd witnessing a top-level football competition for the first time in this satellite town.

While Mumbai, co-owned by Bollywood star Ranbir Kapoor and Bimal Parekh, did not get the desired result on the first day of the tournament, there were quite a few positives that the team could take from the encounter.

Despite the absence of their marquee players Freddie Ljungberg of Sweden and Frenchman Nicolas Anelka, the team had 57 per cent possession in the game and had more shots on goal than their opponents.

The team management would be hoping to utilise the services of Ljungberg on their home turf - D Y Patil Stadium in Navi Mumbai, better known for hosting IPL cricket matches in the past - which could make a big difference.

It would be interesting to see what strategy coach Peter Reid adopts against a team that has shown that they can defend deep in their goalless draw against Dynamos in the opening match, with goalkeeper Emanuele Belardi a veritable rock behind the deep defence as he showed by pulling off some fine saves.

Reid had played an attacking formation in Kolkata despite it being an away game and he is likely to adopt a similar aggressive approach in their first home encounter. 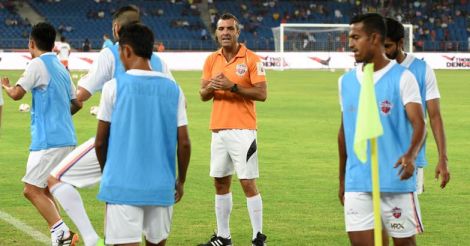 The team would, however, be without skipper Syed Rahim Nabi, who injured his ankle in the opening game and has been ruled out for at least three weeks. This means that former German international Manuel Friedrich would have to shoulder the responsibility of guiding the Indian players and ensure that they play the perfect foil to the likes of new signing Andre Moritz.

With the style of play the team has adopted in the competition, the role of custodian Subrata Pal would once again be critical for the team. The first choice stopper of the Indian team for a few years now, Pal showed why he is considered the best in the country during the encounter against Atletico de Kolkata. Pune, on the other hand, would be looking up to their marquee player, David Trezeguet, up front to crack open the Mumbai defence.

The World Cup-winning former French striker would in turn expect the Pune midfielders and wingers - Nigerian MacPherlin 'Dudu' Omagbeni and home grown Joaquim Abranches - to function well and lay passes for him to take advantage of.

The stadium has been given a real facelift and is once again set to provide an ideal platform for a top level sporting competition.