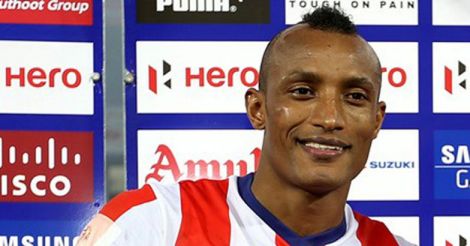 Kolkata: Atletico de Kolkata's main striker Fikru Teferra, who was suffering from a hamstring tear, has been ruled out of the ISL football final against Kerala Blasters in Mumbai on Saturday.

The Ethiopian striker has been released by the Kolkata franchise as he's heading to South Africa to treat the grade 1 tear in his hamstring.

"Fikru's injury would have kept him out of the all important final... We decided to release him ahead of the title clash to enable his speedy recovery," team co-owner Utsav Parekh stated in a release.

The team management also congratulated him on becoming the proud father of a baby girl.

"I on behalf of the team management wish him and his wife all the happiness to enjoy the most precious bonding with their little baby. Since Fikru would not be available for Saturday's final we decided that staying with his family at this moment of joy would be ideal," Parekh said.

The ace forward, who played as the lone forward in Antonio Habas' 4-2-3-1 formation, missed both the legs of the semifinal and last played in Kolkata's 1-1 draw with FC Goa at home on December 10.