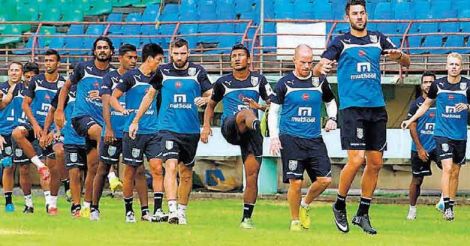 Mumbai: After two-and-half months of engrossing football, Atletico de Kolkata (ATK) face Kerala Blasters FC in the Indian Super League (ISL) final here on Saturday. Both have fought their way through some memorable encounters to set up a mouth-watering summit clash in the inaugural edition.

What will provide extra attention to what promises to be an enthralling contest at the D.Y. Patil Stadium will be a face-off between former cricketing team-mates and opening partners Sachin Tendulkar and Sourav Ganguly, respective co-owners of the Kerala and Kolkata franchises.

Blasters advanced to the finale after emerging victorious in a hard-fought encounter against Chennaiyin FC.

Atletico's path to the final was also anything, but smooth. After playing out a goalless draw at home with FC Goa, they defended resolutely away at the Jawaharlal Nehru Stadium in Margao to force the match into penalties, winning 4-2 after the shoot-out.

Atletico had to field a depleted side against Goa that forced their coach Antonio Lopez Habas to adopt a safety-first approach. They will still be without their leading striker Fikru Teferra, who was ruled out of the final with a hamstring injury.

He has since been released by the franchise. He has a grade 1 tear in his hamstring and will fly to South Africa for treatment.

While Atletico's offensive strength will be considerably lessened by his absence, their defensive might will be bolstered by the return of Indian international Arnab Mondal, one of the bright faces of the tournament.

He will partner former Liverpool man Jose Miguel Rey at the heart of the defence, which will give their Armenian custodian Edel Bete some added cushion.

But their biggest worry remains the availability of marquee player Luis Garcia, whose involvement was restrained against Goa due to a hamstring injury.

Spanish duo of Jofre Mateu and Borja Fernandez will don an important role in mid-field. Their performance at the middle of the pitch will be crucial as they will be weighed with the task of providing passes to strikers Mohammad Rafi and Sanju Pradhan.

Kerala will rely heavily on their star forward Iain Hume to provide the thrust up front. They may even for a two-man strike line, throwing in Englishman Michael Chopra alongside the Canadian.

The magnanimity of the occasion may even tempt coach-cum-goalkeeper David James to take to the field.

Their mid-field will be powered by the Indian duo of Ishfaq Ahmed and Sushanth Mathew.

Sushanth will take to the field with renewed confidence after scoring one of the goals of the tournament against Chennaiyin FC in the first leg of the semi-final -- a 25-metre left-footed strike.

Atletico may have lost a bit of the initial rhythm, after soaring to the top of the standings early on in the tournament, having won only one of their last 12 encounters, but the match will provide them with the perfect opportunity to add credence to the age-old adage - all's well that ends well.

Kerala, similarly, will want nothing less.