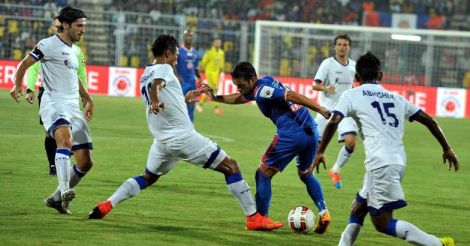 Action from the match between Chennaiyin FC, white, and FC GOA at Margao on Wednesday. PTI

Margao: In a pulsating Hero Indian Super League (ISL) encounter, Chennaiyin FC edged past hosts Goa FC 2-1 as forward Balwant Singh, who scored for the visitors, became the first Indian goalscorer in the tournament at the Jawahar Lal Nehru stadium, here on Wednesday.

Chennaiyin, co-owned by Abhishek Bachchan and Indian cricket captain Mahendra Singh Dhoni, went ahead with Balwant etching his name in the history book's with his 32nd minute strike.

They soon doubled their lead, with Elano scoring via a beautiful free-kick and the curling strike took his team into half-time, with the score reading 2-0.

Goa eventually tried to claw their way back into the game as central defender Gregory Arnolin netted a goal from close range.

But the resolute Chennai defence made sure their campaign began with a win and they became the first visiting team to register a win. The highlight though remained on Balwant, who was more than pleased with his effort and his team's performance.

"It is an absolute honour to become the first Indian scorer in the Hero ISL. You always have to work hard to get into the team because there are so many quality foreigners. So I think my hard work paid off. I would like to thank my coaches and family," said Balwant after the win.

Chennai coach Marco Materazzi was also happy with the outcome and said, "The boys put up good performance and held ball possession after scoring both the goals. In the second half our defenders did a good job to deny the home team the equaliser."

Zico though was disappointed with a losing start, but did manage to put up a brave front.

"The boys played their hearts out till the end,especially in the second half which they dominated, creating ample of scoring chances, but failed to cash on the opportunities and ultimately ended on the loosing side," said Zico.

"The Marquee player Robert Pires played well, created a few good opening for his striker with delightful passes. The atmosphere was good with the Goan crowd supporting us till the end. All the four matches of the first round saw good attendance, its a good beginning to see lot of people coming to the matches," he added.