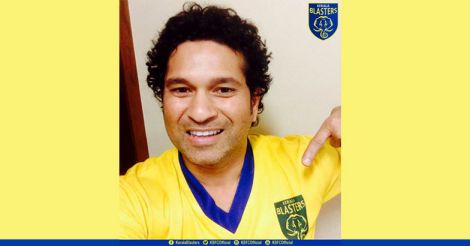 Kochi: Kerala Blasters’ owner Sachin Tendulkar has arguably been the biggest celebrity associated with the ISL on social media. The cricketing legend started to promote his team by unveiling Blasters’ jersey via his Facebook and Twitter handles, by posting a selfie wearing the team's shirt.

From then on, Tendulkar posted several selfies throughout the competition, including one with Yuvraj Singh and Zaheer Khan after the Blasters beat Chennaiyin FC 3-0 in the semifinal first leg.

As the Master Blaster became active on Twitter and Instagram with selfies and posts regarding his team, Blasters evolved into a social media giant. The spark triggered by Tendulkar was taken over by the Blasters fans, who went all out to boost the team's social media profile.

Several Facebook memes, created by Blasters fans after the team vanquished Chennai in the semifinal first leg, went viral. Most of them took a dig at Chennai co-owner Abhishesk Bachchan, who routinely performed his trademark 'snake dance' during Chennai's matches.

The Blasters fanbase was ready with a reply to Abhishek for some time. But since Chennai won both matches at the league stage, the retort did not work out.

However, the fans got their chance at payback with the Blasters' thumping semifinal first leg win over Chennai. They celebrated the victory with an image of Abhishek throwing a challenge before the match, followed by a meme of the entire Bachchan family running for cover.

Another meme which became an instant hit was the collage of Zinedine Zidane and Kerala Blasters' mascot tusker knocking down Chennai coach Marco Materazzi.