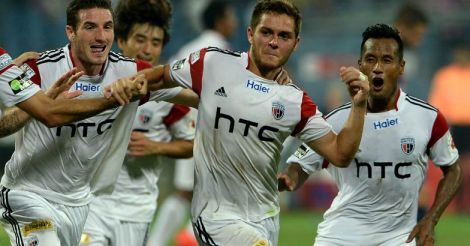 Mumbai: NorthEast United struck twice in the second half in a remarkable turnaround to stun Mumbai City FC 2-0 in a Hero Indian Super League match which saw the home side reduced to nine men in the end here on Friday.

The home side, who had thrashed Pune City FC 5-0 in their previous match, failed to score a goal despite dominating the proceedings early in the match in front of their home crowd at the D Y Patil Stadium here.

The first half belonged to Mumbai City FC, but the visitors came back in the second half with a superior performance as they scored two goals to run away winners in their first away match of the tournament.

Zambia's Kondwani Mtonga grabbed the opener in the 57th minute when he collected Koke's pass to work past the lone defender Tiago Ribeiro and custodian Subrata Paul.

NorthEast United FC doubled the lead in the injury time when James Keene, who came in place of Koke in the 69th minute, fed the ball to Guilherme Felipe who just had to beat the goalkeeper, to seal the issue for the visiting side. 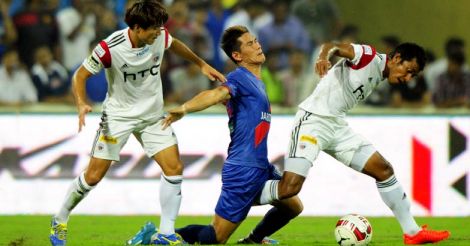 Mumbai now have just three points from two matches while NorthEast have added three points to their kitty with the win. Photo: Vishnu V Nair/Manorama

The match also saw some bizarre moments as Mumbai could not send in a replacement for injured marquee player Frederik Ljungberg who pulled his hamstring in the 72nd minute as the home side have used all their substitutions by then, leaving them one man short.

Making matters worse, Mumbai were reduced to nine men on the field when Czech defender Pavel Cmovs had to leave the field in the 75th minute after getting his second yellow card of the match.

Mumbai now have just three points from two matches while NorthEast have added three points to their kitty, taking their tally to seven from four games.

Mumbai now take on Chennaiyin FC on October 28 in an away encounter, while NorthEast play against Delhi Dynamos in the capital city on October 29.

The hosts played the first few minutes of the second half with just 10 men on the field as Ljungberg kept trying to grab the assistant referee's attention to substitute him in place of Andre Moritz.

John Abraham co-owned NorthEast United looked like a renewed side in the second half with Durga Boro creating a couple of chances after the goal-less first half.

Mumbai's Brazilian import Andre Moritz, who dazzled with his hat-trick against Pune, came close to giving his side a lead in the seventh minute but his effort was off-target.

Winger Nadong Bhutia wasted an opportunity when he failed to pass the ball accurately to Subash Singh in the 14th minute.

The hosts, who were dominant from the start, had no trouble in weaving their way into the other half and created a lot of chances. But they could not convert the chances that came their way.

The visitors substituted Zambia's Isaac Chansa in the 12th minute bringing in Brazilian Guilherme Felipe de Castro and the move nearly paid off six minutes later but he failed to keep his shot on target.

The Guwahati franchise had another opportunity in the 23rd minute when Koke took a free kick from the left-end of the box but Felipe's header went over the bar.

A poor tackle from Mumbai's defender Johan Letzelter earned him a yellow card in the final minute of the half-time, while trying to bring down Felipe.