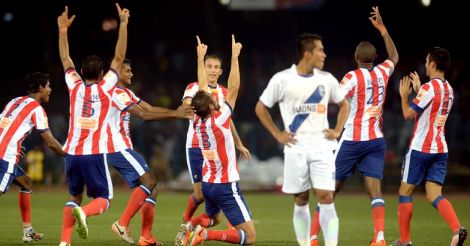 Kolkata: Atletico de Kolkata gave the football-crazy city fans a night to remember in their 3-0 drubbing of Mumbai City FC as the inaugural Hero Indian Super League football tournament kicked off in spectacular fashion after a star-studded opening ceremony here.

It was Fikru Teferra who struck the first goal of ISL to give the home franchise a 27th minute lead to bring the 70,000 capacity crowd at the Salt Lake Stadium to their feet, while Borja Fernandez's stunning volley from the edge of the box delighted one and all with some top quality stuff.

Substitute Arnal Llibert (90+3rd) gave the Kolkatans enough reasons to celebrate by turning Fikru's cross from the right to give a perfect ending to the match of the league touted to change the landscape of Indian football.

From the short passing of ATK's to the trademark English style long passes by the MCFC, it was high quality football on display, something that was rarely seen at the Vivekananda Yuva Bharati Krirangan.

The audience at the iconic stadium varied from hardcore football fans to young families to children.

It was a day of many firsts at VYBK as fans enjoyed the beautiful game with re-plays from 17 giant screens that dotted the uppermost tier, something that was never experienced in Indian football.

Fikru Teferra, the 28-year-old Ethiopian forward, got a long through pass from ATK's marquee player Luis Garcia and before German defender Manuel Friedrich could intercept, brilliantly chipped over local lad Subrata Paul for the first goal.

The home team had the better share of chances and Spanish short passing skill was well evident in the side which had its affiliations with La Liga giants Atletico Madrid. 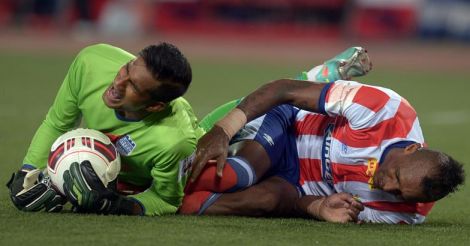 Dominating the game in deft passing, ATK got two fine opportunities early into the game with Baljit Sahni missing a one-on-one chance with Paul in the ninth minute.

Garcia was involved in both the chances as the former Liverpool star first set up Sahni before his left-footed volley was saved by Paul in the ninth minute.

Mumbai tried to add sting to their attack bringing in Italian forward Andre Moritz in the second-half and he won a freekick at the edge of the box but only to put it away.

MCFC also had a narrow escape when their defender Raju Gaekwad got away from a second booking and possible red after a tough challenge.