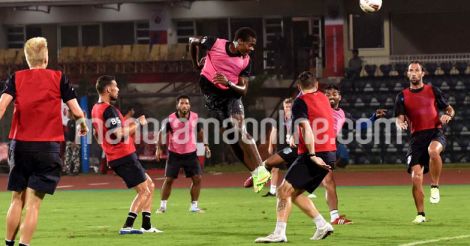 Players of Kerala Blasters going through their paces on the eve of their match against NortEast United at the Indira Gandhi Stadium in Guwahati. Photo: Suresh Jayaprakash

Guwahati: A humdinger of a contest is on the cards as NorthEast United FC take on Sachin Tendulkar co-owned Kerala Blasters FC in the second match of the Hero Indian Super League (ISL) here on Monday.

The Ricki Herbert-coached home side will bank on the support of a fanatical home following and a potent attack to help breach the Kerala citadel, which will be guarded by a hugely competent defence.

Intrigue surrounds the Kerala Blasters goalkeeping spot, as it remains to be seen whether marquee player-manager and former England goalkeeper David James will play himself, or take up managerial duties on the sidelines.

The home side will reap the cohesive benefits of its youthful, albeit relatively inexperienced, Indian contingent who hail from Shillong Lajong FC.

The visitors will not be disadvantaged as their Indian players have been handpicked by assistant coach Trevor Morgan from among his former East Bengal wards. All eyes will on the mercurial attacking mid-fielder Mehtab Hossain, who was Morgan's first pick during the domestic player draft.

Kerala Blasters are banking on Mehtab to unleash his destructive potential on the opposition and try to nip all NorthEast attacks in the bud in the middle of the park. This is a great chance for Mehtab to show the world why he is hailed as India's best defensive midfielder.

For the home side the match to watch out for will be Cornell Glen. The former Trinidad & Tobago World Cupper, who has past Indian experience with Shillong Lajong, is expected to front an incisive attack which has Luis Padilla, James Keene, Sergio Pardo, and Seimenlen Doungel as the support options. Expect Colin Falvey, Cedric Hengbert, Jamie McAllister and other rocks in the Kerala defence to secure their fortress with great determination.

Another NorthEast United FC who will also have his share of spotlight is Alexandros Tzarvos, Greece's 2010 World Cup goalkeeper. His presence under the bar will lend assurance to his teammates. A clean sheet will be his great contribution to the cause.

Kerala Blasters will also rely on the season Penn Orji. Morgan may rely on his trusted former hand to unlock the home defence which will be helmed by marquee player Joan Capdevila. The wily Nigerian central midfielder is quite capable of providing a few moments of magic that can create the openings and enable the likes of Michael Chopra, Iain Hume, Andrew Barisic to take full advantage.