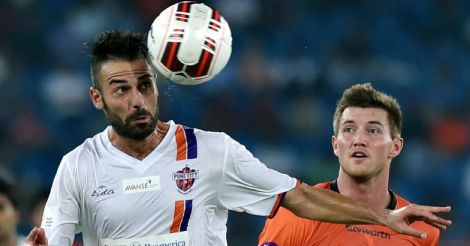 FC Pune City's Daniele Mgliocchetti, left, heads the ball during their match against Delhi Dynamos at the Nehru Stadium in New Delhi on Tuesday. PTI

New Delhi: Delhi Dynamos paid the price for their profligacy even as Alessandro del Piero's presence failed to break the deadlock in their barren draw with FC Pune City in the Hero Indian Super League here on Tuesday.

Del Piero did not start, much to the disappointment of the 30,000-odd turnout at the Jawaharlal Nehru Stadium, but the Italian and Juventus legend was introduced in the 37th minute amid loud cheers.

Dynamos missed chances galore till the final whistle. In the 90th minute, Brazilian Gustavo Dos Santos, coming on as a late substitute, unleashed a left-footer only to see the ball hitting the upright after the goalkeeper was beaten.

Five minutes before that, Hans Mulder received a curled free-kick from del Piero, but his header sailed over the bar. Delhi called the shots in the first half, creating innumerable chances but, at the end of first half, their domination came to naught as the scoreline remained goalless.

Leading the side, Mads Junker had a bad day in office, the number of misses adding to his agony.

The flurry of misses had the crowd frustrated and it needed the arrival of del Piero to break the ennui in the stands. The huge roar was followed by the Mexican wave and it repeated for a while.

Del Piero was on the ball right away, at 39 trying his best to create opportunities. His enterprise delighted the crowd, but a goal remained elusive. 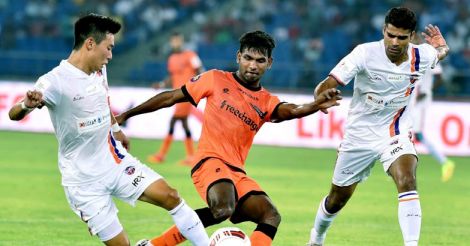 After a none-too-impressive outing in the first 45 minutes, Junker had a chance to get his team ahead, but he could not beat Emanuele Belardy at the goal after receiving a through ball from Shylo Mama Malsawmtluanga. Earlier, the Danish also had opportunities in the 11th and 19th minutes which he wasted.

Content playing in the deep before the break, Pune made a couple of quick changes bringing in Dudu Omagbemi for Israil Gurung and replacing Greek World Cupper Kostas Katsouranis with Indian midfielder Mehrajudding Wadoo.

Meanwhile, in the 68th minute, del Piero unleashed a scorcher from 25 yards, but his attempt curled a bit more than he would have wanted, missing the target by whisker.