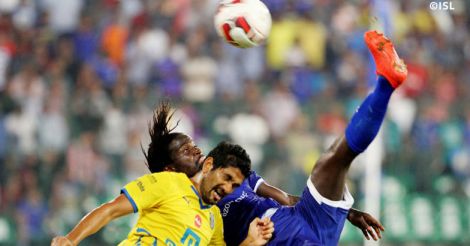 Chennayin FC now have two wins from as many matches while Kerala are at the bottom of the table having lost both their games in the inaugural tournament.

The Chennai outfit got the lead through their best player and Brazilian import Elano Blumer via a spot-kick while Scottish striker Iain Hume's powerful volley from the close range brought the equaliser. 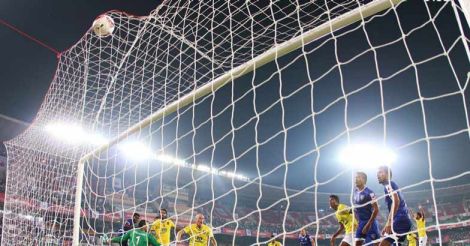 However, it was the magical goal by Mendy in the 63rd minute that made even Sachin Tendulkar, clad in canary yellow Kerala Blasters jersey, applaud while Amitabh Bachchan, co-owner Abhishek Bachchan and Tamil mega star Rajnikanth erupted in joyous celebration.

It was an indirect free-kick taken by Elano that curled inside the box while East Bengal captain Harmanjot Singh Khabra headed it towards the edge of the six-yard box. Mendy, sensing a chance immediately, swerved his body to take a brilliant bicycle kick which saw the veteran David James failing to react at the suddenness and perfect execution.

The Frenchman, while playing for Hull City, had scored against Manchester United in a Premiership game in 2010 which Hull lost narrowly to the Red Devils by a 3-4 margin. 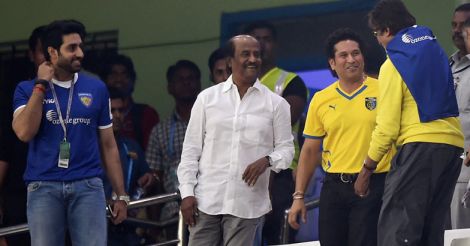 It was a game that was dominated by the Chennai team playing in their navy blue jerseys.

They enjoyed better ball possession and could have scored as early as the first minute when Abhishek Das put in a cross for Balwant Singh, whose header missed the target by a whisker.

It was in the 14th minute that East Bengal stopper Gurvinder Singh's ill-timed tackle saw Das sprawling inside the penalty box. The referee pointed at the dreaded spot and Elano did not make any mistake in putting it past James.

For Blasters, the problem has been the slowness of a distinctly overweight Michael Chopra, who has clearly left his best days far behind. 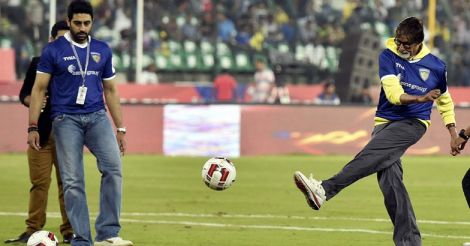 Actor Amitabh Bachchan attempts a kick as his son, actor and Chennaiyin FC co-owner Abhishek Bachchan looks on. PTI
×
related stories
Your Rating:
Thank you for rating.
You have already rated this article !!!
Mail This Article
Your form is submitted successfully.