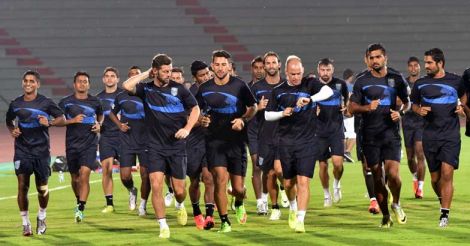 Kochi: Both Kerala Blasters and Chennaiyin FC cannot afford to lose Sunday's Indian Super League match in Kochi. Chennaiyin FC will have 21 points if they win the match, placing them on a smooth sail to the semifinals. Kerala Blasters, however, have to score big to get over the humiliating defeat in Goa. They have to win each of the pending matches to reach the semis.

When Goa beat Kerala Blasters, it became the biggest defeat in the tournament. The Kerala team could not recreate the blast it had against Kolkata. David James let three goals pass for the first time. Their formidable defence was shattered, reminding spectators of the Blasters' away match against Mumbai. Blasters have to get their acts together to score big against Chennaiyin FC.

Sunday's match will be between the team that scored the most and the team that scored the least. Chennaiyin FC leads the goal tally with 20 goals while Kerala Blasters have only eight goals to their credit. But the Blasters find solace in their neighbour’s inconsistent performance record. They started big and dragged with draws before coming back with convincing victories against Pune and Mumbai. Then it crumbled under Northeast United, conceding three goals in the first half.

Kerala Blasters are looking for a booster shot when they play their home match. Kochi stadium had thrilled players and spectators alike. Active support from the gallery will be an advantage for Blasters. Chennaiyin FC might have a replay of events when they lost to Northeast United and their active supporters.

Injuries hold back Chennaiyin FC. Steven Mendoza and Elano have returned  due to injuries. Elano's magical freekick that helped sent back Blasters in their home match would be missed.  Jeje Lalpekhlua, Bruno Pelissari and Bernard Mendy present an enviable lineup though.

Bollywood actor Aishwarya Rai Bachchan is expected to accompany her husband Abhishek Bachchan, the owner of Chennaiyin FC. Abhishek has been an energetic supporter of his team in the gallery for all the matches. Kerala Blasters owner Sachin Tendulkar, however, will be missed. He changed his plans in the last minute.