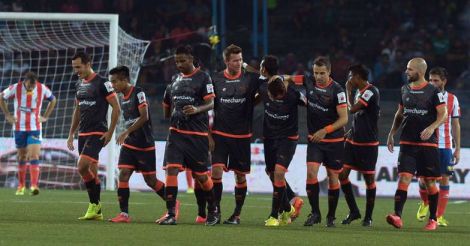 Delhi Dynamo footballers celebrate their equaliser against Atletico de Kolkata in the Indian Super League at the Salt Lake Stadium in Kolkata on Sunday. Photo: AFP

Kolkata: Czech midfielder Pavel Elias struck a stunner to help Delhi Dynamos halt Atletico de Kolkata's two-match winning run as both the teams settled for a point each after an intense 1-1 draw in their Indian Super League fixture here on Sunday.

Barcelona's youth system product, Jofre Mateu, gave the home franchise a 49th-minute lead, but Dynamos brilliantly bounced back through Elias in the 73rd minute to give the visiting side its first point.

The scoreline may suggest otherwise but the match was full of intensity and Italian World Cup winner Alessandro Del Piero, who started in the XI, narrowly avoided a red card after an intense scuffle with ATK players.

There was a clash between the players when Del Piero brought down Denzil Franco with his left-foot tap in an outrageous challenge.

The players surrounded the iconic Juventus star and pushed him before the goalie intervened.

The home side had its share of run-ins as well, resulting in its back-to-back red cards as it was once again reduced to 10 players when Rakesh Masih picked a second yellow in the 88th minute.

Masih's substitution in place of ATK marquee player Luis Garcia, who pulled a hamstring muscle at the break, gave Dynamos the edge and they bounced back.

Action was reserved for the second half as Jofre converted a penalty with ease, drilling the ball low to the left of the 6 feet 10 inch Kristof Van Hout to put ATK ahead.

Jofre showed his presence of mind to convert the first penalty of the franchise league that came after Wim Raymakers pulled Fikru's jersey to bring the Ethiopian down in the decisive moment of the second half.

If the giant Van Hout impressed in the first-half standing tall under the bar, the goal also exposed his vulnerability to collect low strikes as ATK looked to press further in front of a packed 60,000 roaring supporters.

Dynamos were immediately put under pressure as the duo of Jofre and Fikru up front kept the opponents defence on vigil.

But Elias shocked the home crowd, scoring with a 23-yard long ranger after Del Piero put in the cross.

Having settled for a goalless draw in their opening outing against FC Pune City, the visiting side showed the intent by naming Del Piero in the starting line-up with the captain's arm band.