Other Stories in ISL 2014
prev
next
next
Mumbai City FC 's Andre Moritz, left, celebrates after scoring a goal against FC Pune City at the D.Y. Patil Stadium in Mumbai on Saturday. AFP

Mumbai: Brazilian Andre Moritz dazzled in front of the home crowd with a hat-trick to power Mumbai City FC to a stunning 5-0 victory over FC Pune City in a Hero Indian Super League fixture here on Saturday.

Mumbai dominated the match with their attacking style of play with excellent wing to wing passing to notch up their first victory in the tournament, and the biggest yet by margin, after losing their opening game, which kick-started the league, 0-3 in Kolkata to Atletico de Kolkata.

Mumbai were keen to secure three points which they did with aplomb after a stunning first-half display that ripped open the Pune defence at the D Y Patil Stadium. The visitors remained on one point, courtesy a goalless draw with Delhi Dynamos on October 14.

Moritz struck in the 12th, 27th and 71st minutes while Subhash Singh fired home in between in the 36th minute of a totally one-sided encounter.

Defender Johan Letzelter completed Pune's humiliation by firing in the fifth and last goal in the 85th minute.

Mumbai could have been up by half a dozen goals by half-time, but for some alert goalkeeping by Emanuele Belardi who had to contend with a jittery defensive four in front.

Brazilian Moritz, who came on as substitute in their lost lung opener against Kolkata on October 12, fired in the first two goals thanks in good measure to some poor defensive work from Colombian Andres Ramirez, Italian Bruno Cirilo, Dharmaraj Ravanan and Pritam Kotal, and then added one more after the breather.

The first one, in the 12th minute, was a real beauty as the Brazilian uncorked a powerful left-footed shot from just outside the right corner of the box to the far corner of the net with Belardi diving in vain.

The move was initiated by a superb diagonal pass from the left wing from Lalrindika Ralte who had an outstanding game. All that Moritz, who was unmarked, had to do was to move up a few paces and take the shot which he did with inch-perfect accuracy.

Fifteen minutes later Moritz gently tapped in a corner kick from Ralte to give Mumbai a handy 2-0 lead, a few minutes after Pune's marquee player and French World Cup winner David Trezeguet came up with a stunning scissor-kick from inside the box only to see the ball hit the crossbar.

The corner was awarded when Belardi punched out a diving, angular header by Nadong Bhutia and the Pune custodian again came to his side's rescue to foil another left-footed try by Ralte. Moritz was to take advantage again of some shoddy defending, after Ramirez had been substituted by Israil Gurung, in the second half to squeeze in a shot just to the right of Belardi before defender Johan Letzelter completed Pune's misery by scoring from close range off a centre in the 85th minute. 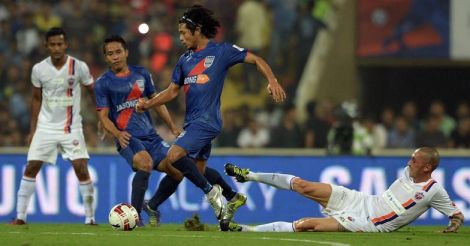 Subhash Singh, who had also been used as a substitute by Mumbai coach Peter Reid in the first game, earlier went into the scorers' book in the 36th minute when he ran forward, after being fed superbly by team-mate Jan Stohanzl from the Czech Republic, and beat Belardi to the goalkeeper's left with a fine shot.

But, Subhash was guilty of squandering a sitter four minutes later when he was unmarked and had only Italian Belardi to beat without being challenged and struck wide of the right post.