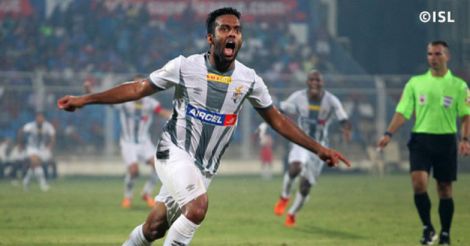 Margao, Goa: East Bengal midfielder Cavin Lobo scored a brace in the second half to help table-toppers Atletico de Kolkata overcome a one goal deficit and edge past hosts FC Goa 2-1 in the Hero Indian Super League (ISL) at the Jawaharlal Nehru Stadium, here on Thursday.

It was Brazil International Andre Santos, who opened the scoring for Goa in the 21st minute as the home crowd erupted with joy.

Clifford Miranda from the right send a long cross in the middle for Santos, who controlled the ball inside the box and essayed a left-footer that saw the ball nest at the roof of the net.

Kolkata, who lacked creative in the absence of captain Luis Gracia came with couple of good moves but the alert rival defenders led by Youness Bengelloun and Gregory Arnolin did the marking well.

Frustrated for not getting the equaliser, the visitors displayed a physical game, which saw Borja Fernandes and Fikru Teferra earn a yellow card in the first half.

Kolkata, who have now consolidated their lead at the top to stay clear by 6 points, kept attacking but Goa held on the 1-0 lead till half time.

The play after half-time more aggressive as Kolkata counter attacked and Goa looked to double their lead.

After the change of ends, Fikru who was kept quiet in the first half eluded his striker and took a left footer which sailed over the bar.

Santos and French World Cup-winner Robert Pires, who combined well in the middle kept on the pressure over their rival.

FC Goa nearly increased the lead in the 62nd minute but defender Debbabrata Roy left footer hit the post and off the rebound Arnolin missed to score before keeper Bete grabbed the ball.

Few minutes latter, Pires initiated a good move from the middle as he relayed the ball to Gabriel, who in turn relayed to Andre Santos who failed to score from inside the box.

Lobo then stepped in the 72nd to net the equaliser and also register his first ISL goal.

Kolkata soon stepped on the gas as Lobo scored his second in the 82nd minute with a left footer to keep Kolkata consolidated their position at the top with 10 points from 4 games.

The Antonio Lopez Habas-coached side has registered 3 wins in 4 games.

Goa though have succumbed to their second defeat and remain on one point from three matches.